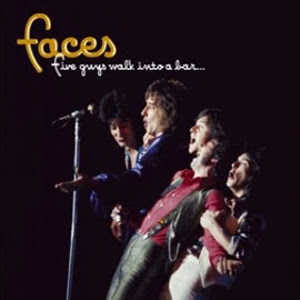 .. and all hell breaks loose.

I wasn't prepared for the sonic onslaught of the boxed set that bears that name. I don't know why. Rod Stewart during the Rockin' Rod years (roughly circumscribed by 1968 - 1973) was arguably the greatest throat to ever tangle with power chords, but I think I still expected more in the way of throwaways and decidedly inferior outtakes than I got.

What I got was the equivalent of a half dozen great new Faces albums, somehow left in the vaults for decades. An astonishing 45 of these 67 tracks were previously unreleased, or released as B-sides to long-gone singles, and the revelations are many and astonishing. First, consider the fact that many people consider The Faces of the early '70s as the greatest live rock 'n roll band of the era, better than the oft-championed Rolling Stones. But based on the lone live album in the official catalogue -- 1974's woefully uneven and besotted Coast to Coast -- you'd never know it. Now consider the fact that this boxed set contains a dozen smoking live tracks that finally justify the claim. Add some revelatory BBC sessions, a batch of unheard new material (to me, at any rate; sorry, but I wasn't buying the singles at the time), and a few alternate but hardly inferior versions of the well-known classics, and you've got one of the few truly essential boxed sets.

Rod Stewart is only part of the show here, of course. Bassist Ronnie Lane contributes several sweet, country-tinged vocal turns, and even Ron Wood, he of the blistering slide guitar, gets in a couple yelps. But hearing Stewart unleashed, finally, in a live setting that truly shows off that remarkable voice, and backed by a balls-to-the-wall rock 'n roll band, is one of the great pleasures of my life. This stuff makes me want to riot, even at an advanced age. Keep me away from the expensive furniture.

It all makes me shake my head in disbelief at the travesty that Rod Stewart became in such a short time. At least we had five great years.
Posted by Andy Whitman at 1:54 PM