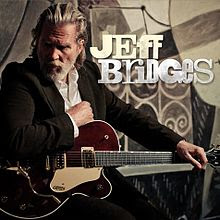 In the end, it's a moot question as to whether Bridges has the musical goods. He sings well enough to be totally believable. It's a talent he's transferred over from his movie roles, and the Dude abides just fine in the recording studio. I'll have a more detailed review out in Christianity Today, but this one is a delightful, moving surprise.
Posted by Andy Whitman at 9:49 AM

I look forward to hearing it. Jeff Bridges is the coolest.