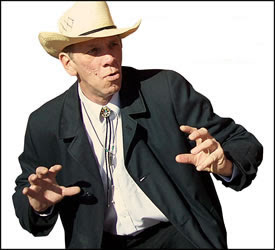 I don't know if there are many blues fans here, but this guy Watermelon Slim is one Delta Mack Daddy, the most exciting and authentic blues performer I've heard in years. Surely the ghosts of Muddy and the Wolf are smiling. Mr. W. Slim is one William P. Homans of Oklahoma City, Oklahoma -- Vietnam veteran, truck driver, forklift operator, sawmiller, firewood salesman, collection agent, funeral-parlor director, small-time criminal, watermelon farmer, college graduate times three, and member of Mensa. You can hear all that and more in his songs, which have justly made him famous at an advanced age, almost forty years after he recorded his first album.

The three albums you're likely to find -- Up Close and Personal, Watermelon Slim and the Workers, and The Wheel Man -- are as raw and as viscerally moving as any blues albums I've ever heard. This is no dilettante dabbling in some ancient, petrified musical genre. He's very much invested in the proceedings, he's one hell of a bottleneck guitarist, and he's got that cry in his voice that only the greatest singers in the genre have had before him. In short, he's the real deal. He covers Muddy, the Wolf, Sonny Boy Williamson, and Mississippi Fred McDowell, and he writes originals that can hold their own with the classics. And yes, he wrote most of those originals while behind the wheel of his big rig. He's got a big, raw sound, equal parts Mississippi Delta acoustic and Chicago electric. He's fabulous. You should check him out.
Posted by Andy Whitman at 5:46 PM

My personal favorite of this genre is Paul Geremia.