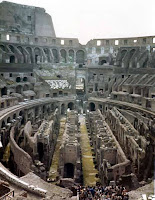 Oh, the streets or Rome are filled with rubble
Ancient footprints are everywhere
-- Bob Dylan, “When I Paint My Masterpiece”
And so they are. In about 6 hours Kate and I will be headed to Rome, the first stop in a 16-day journey that will also take us to Venice and Florence, and perhaps a couple other cities along the way. It’s an impossibly extravagant venture, one we can’t really afford with two kids in college, but you do what you have to do. It’s our 25th wedding anniversary, and somehow a weekend at Lake Erie just didn’t seem quite adequate.

Twenty-five years is a long time. Twenty-five years ago I was skinny and had a lot more hair, and Kate, the silver fox, had dark brown hair. In between we had a couple kids, moved a few times, changed churches a few times (echoing Bono's heartfelt lament, "I still haven't found what I'm looking for," although I think we're pretty close this time), and became different people.

The reasons people marry are many and varied. I wouldn't have stated it this way 25 years ago, but one of the big ones for me is that I was in panting lust with the woman who was to be my wife, and, as a Christian, I had a hard time justifying just hopping in the sack. So I did what good Christian boys are supposed to do. I got married. There was a lot more to it, of course, because there is a lot more to Kate. But that was a big part of it. I was lonely, I was horny, and here was a beautiful, kind, intelligent woman who loved the Lord and who was willing to marry me. Did I mention beautiful?

I think the shit hit the fan about Day 3. And it has flown intermittently ever since, primarily because I've managed to chuck the turds at the rotating blades on a fairly routine basis. It has not been easy to be married to me. Everybody enters marriage with baggage. I came dragging old foot lockers and trunks, carry on bags, an assortment of Samsonite luggage, junk stuffed willy-nilly into plastic totes. The shit was everywhere, and although some of it was out in the open, some of it was buried deep in storage compartments, hidden away under lock and key. And here is one sad but glorious fact: the shit is still there, but 25 years down the line it isn't piled nearly as high as it was. This is because I am married to the woman who said "I do" 25 years ago, and who has lived through days where she has regretted that, but who has never once wanted to say "I don't."

Don't let anybody tell you that this Christianity business isn't hard, or that it isn't fraught with surprise and mystery. One of my friends has recently decided to check out of the business. It's too confusing. You look for God to show up, and when you really need Him to put in an appearance, He's AWOL. I sympathize. He doesn't play by any rules I understand. But I also look around at the people He has brought into my life. They are remarkable. And I know, without a doubt, that the way He seems to work is through those people, through the inexplicable love they have for me when I am not lovable, when I am not kind, when I am only concerned about the ongoing expansion of the Kingdom of Me. You can put Kate at the top of that list.

Because life is one big soundtrack to me, I carry around tunes in my head as I prepare for our trip. One is by Bob Dylan, and is quoted above. The other is by Bruce Cockburn. Bruce Cockburn is a Canadian musician who has been writing the soundtrack to my life since I first discovered his album Night Vision way back in 1974. I haven't missed any of his albums since. And he wrote a song that nailed the strange patterns, the halting little minuet that two non-dancers do when they are still trying to figure out the steps. Sometimes I despair of ever really changing. But sometimes, after 25 years, I survey the scenery and I discover something amazing. The rubble is still there, and it crunches underfoot. The ancient footprints are everywhere. But I look around, and there appears to be a new building under construction. It's not spectacular, but it's held up for a while, and if you squint your eyes it looks kind of pretty. I am 52 years old, graying and balding and fatter than I was back in my youth, and crazy in love. And I know, without a doubt, that God allowed me to marry the right person in spite of myself.

This is how Bruce Cockburn's song goes:

Italy point #1: Venice smells like fish crap. And the gondola rowers will try to rip you off. But it's an amazing thing to see. Given global warming and consequent sea rising, it may not be around for very long.

Italy point #2: Naples is also a dirty city, but it happens to be (IMO) one of the unrecognized treasures of Italy. Plus it's a short train ride from there to Herculaneum and Pompeii, both of which are haunting to say the least.

Question: which do you think has made you more aware of your own baggage, marriage or parenthood?

Being a woman, a Christian, a music lovere and married 22 years to My Handsome Prince, this post made me cry. I found you via your review of Anders new cd. Your post reminds me of "I've Got a Woman."
Visit the Forum at night, go to St. Peter's in Chains to see Moses and the chains, don't forget the Trinity by Masachio in Florence, absolutely breathtaking. Eat at Za Za's in Florence, trendy, hip, fun, and outstanding. I could give you an enormous list from two trips there. Most of all lose yourself in the experience. Be lovers. I envy your trip, just the two of you. Venezia, Roma, and Firenze are all wonderful cities. Ciao, Ciao!

Congrats to you and Kate. I'm glad you chose not to quote the part of Dylan's song that refers to "a date with a pretty little girl from Greece." Have fun, have a sense of humor when dealing with Italian chaos, and take lots of pictures to show us at Thanksgiving. Remember that Jess and Kyle were in Italy this Spring, so you can compare notes.

happy anniversary and enjoy the vacation....

Any woman would wish such a tribute to be written to her on her 25th anniversary. Lucky Kate. Have a wonderful vacation in Venice and Florence. Look for animal sculptures for me--there are some wonderful ones there, I understand. And feed a pigeon something.

have a great time!

Have a wonderful time, Andy.

thanks for your honesty. it's refreshing!

cockburn is amazing--particularly when traveling. i remember listening to "all the diamonds in the world" and "starwheel" while hiking in the rocky mountains and crying for the joy of the way the music meshed with the environment. beautiful.

I was opened to Bruce Cockburn's music while on a six-week trip to Newfoundland in 1982--I stayed in a house full of his LP's and played holes in them.For me, his music always evokes the silvery northern light and is intertwined with my love of nature and humanity. Nobody can say it like Bruce.
Andy, I came back to re-read this beautiful post. Hope you're having a wonderful time.