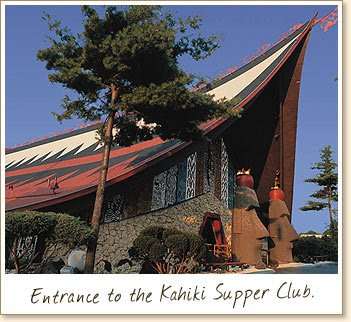 That's the entrance to the Kahiki Supper Club on E. Broad St. in Columbus, sadly gone since 2000. When I was a kid, my parents would occasionally take the family out for dinner to the Kahiki. It was, to put it mildly, a marvelous sensory experience, although very little of that had to do with the food, which was terrible. But the Kahiki was another world right in the heart of central Ohio. There was a tropical rainforest in there, and a waterfall, Ohio farmgirls named Betty wearing grass skirts and leis, weird neon-lit fishes, Tiki torches burning brightly, and alcoholic beverages that bubbled like volcanoes. It was faux Polynesia on the prairie, and as a little kid I thought it was the most exotic place in the world.

I've been thinking about the Kahiki a lot recently. Paste Magazine has asked me to review the 18-album oeuvre of a musician named Arthur Lyman. Arthur, along with Martin Denny and Les Baxter, formed a sort of holy triumvirate of kitsch in the late '50s through the mid-'60s, and his exotic music was the soundtrack to a lot of Space Age Bachelor Pad cocktail parties. He played marimbas and vibraphones, and covered everything from Broadway show tunes to Bob Dylan folk protest songs with a Hawaiian twist. Then there were the parrot and macaw calls in the background.

I will confess that a little bit of this stuff goes a long way, and that nine double-album CDs is a lot to digest. But I'm also looking forward to the experience. I will listen to this music and think not about Hawaii, but about E. Broad St., and the Kahiki, and I will relive a wide-eyed part of my childhood. Aloha.

Aw right! I'd forgotten about those guys. I confess I thought they were pretty cool back there in the dark ages.

Also, I figured I was the only person reading your blog who had ever heard of those guys, and it would be a shame if you didn't get at least one comment.

Well Bill... there's at least two of us. I'm an Esquivel man myself.

Three. There are three. I have wonderful pieces of vinyl by no-names that promise "Lush exotica, in Living Stereo (tm)."

Records are forever, but pity we can't save all the Googie and Tiki architecture. http://www.spaceagecity.com/googie/

I remember hearing about the Kahiki when I was small. I wish I had gotten to see it before it folded.

I love me some exotica/space age batchelor pad music. I've got the whole Ultra Lounge CD series and a stack of "exotic" vinyl.