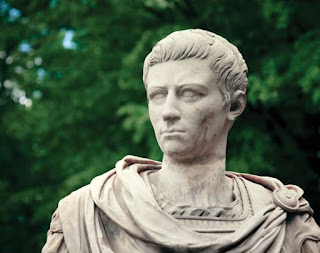 The cray-cray is strong with this one. 25th Amendment time, anyone? Or, maybe not. Maybe Caligula-level self-references to divinity – specifically, to the King of Israel, the Second Coming of Christ, and the Chosen One - are meant to be cynical plays to the Evangelical base, which grows more and more base by the day, and more and more removed from historic Christianity. Up until 2015 or so all of this would have been readily recognized as utterly blasphemous, idolotrous shit. But it’s hard to tell quite what’s up in Trump/Evangel World these days. In Trump/Evangel World, they probably just call it Wednesday.

There are those of us – Christians, or so we would like to think – who will not bow the knee. You may recall what happened to the original bunch who responded this way. Don’t expect it to be much different this time. It was bread and circuses then; it’s bread and circuses now. We have the consolation of believing – naively, sweetly, no doubt – that we are faithful to Christ.