50 Years of Peace and Love 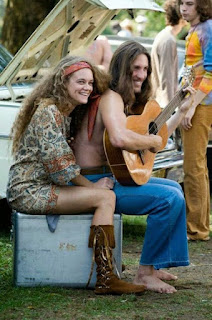 I was 13, almost 14 years old when Woodstock happened. I was fresh out of eighth grade and a month away from starting high school, and no more of a peace-lovin’, dope-smokin’ hippie than Richard Nixon was.

But I paid attention. Walter Cronkite and CBS News showed scenes of the blissed-out hippies, abandoning their flower-bedecked VW Beetles ten miles away from the festival site and hiking in because there was no other way to get there. They originally thought about 20,000 people might show up, and instead 400,000 crashed the party.

At the time Walter didn’t quite know what to make of it. Neither did anyone else. Until those three days in mid-August, 1969, Peace and Love and Dope had seemed like the exotic purview of some strange hippies who were more or less contained and quarantined on the San Francisco peninsula. After Woodstock, the virus was unleashed. The counter-culture simply became the culture. If it wasn’t immediately obvious in the Summer of ’69 (Thank you, Bryan Adams), it was readily apparent a year later, after the Woodstock soundtrack and the Woodstock film had come out and the mass marketing of Instant Hippiedom had begun. It was an assault in every sense; a consumer bonanza for marketers in which fashions changed willy-nilly, but also a deeply introspective time in which attitudes changed and prevailing worldviews changed and the very nature of consciousness changed. It was a time in which millions of young, impressionable kids watched the original hippies waving their hands in the air and asked themselves, “I wonder what that’s about?” And they figured it out.

To give you some idea of how such a massive cultural change happened in a very short time, I will note that my undergraduate college years in Athens, Ohio, and beginning only a scant half-decade after Woodstock, were spent amidst a sea of suburban hippies. And what I mean by that is that almost EVERYONE was a suburban hippie. The usual accoutrements and attitudes – long hair, opposition to the Vietnam War, distrust of Nixon, the requisite hippie fashions/uniform, rolling papers, short pipes and bongs, and/or the furtive acid tabs for Friday night – were so ubiquitous that when I became a Christian midway through the four-year party, and figured out that maybe I should try to abstain just a bit from the usual scene, I instantly became a member of the counter-culture in reverse.

But look, like almost everyone else I fell hard and more or less unconsciously. It was just in the air. It was all around, and it would have required a far deeper thinker and more disciplined individual than I was to not fall hard. And it’s taken me, lo, the better part of half a century to sort it all out, to figure out what was wheat and what was chaff. As it turns out, and because it was nothing if not an excessive time, there was quite a bit of both.

The negatives were more or less obvious, at least in my life. I wouldn’t want to insist that my story was shared by everyone. But I spent significant parts of several decades in a benumbed fog; too stoned to be fully present, or often to be present at all, to my wife and kids, to my neighbors, to the larger world around me. My drug of choice was the one featured prominently in the Woodstock film, specifically in the sequence filmed to accompany Arlo Guthrie’s “Coming Into Los Angeles,” which featured an assortment of hippies toking prodigiously. I can play back that scene in my sleep, although I’d rather not. That’s on me, and I take full responsibility and blame. And if it hadn’t been weed, it would have been – and sometimes has been – something else.

I get it. The problem is me. But I’d be lying if I said that the marketing of the so-called “counter-culture” didn’t have an impact on my life. I liked what I saw. I wanted to try what I saw. And I did. It’s taken a loving and patient spouse, a lot of prayer and repentance and apologies, some therapy, and my own private assortment of 12-Step groups to help unravel the repercussions. But that’s part of the Woodstock Generation as well. I could tell you personally about a few casualties. I am thankful to not be one of them.

From a broader cultural perspective, Peace ‘n Love turned into Reagan Yuppiedom turned into Trump’s Hate World Shitshow. Those are broad-brush statements. They’re certainly not true of all the Baby Boomers I know, and many of them would loudly and rightly protest that I’m engaging in the worst kind of stereotyping. Still, the overall trajectory of the Boomers has not been a positive one. It is often hard to recognize even a dim flicker of the original vision.

But I recently re-watched the film “Woodstock.” I wanted to see what all the fuss was about, now five decades down the line. I skipped over the toking and tripping scenes, simply because I don’t need them, at all. As I said, I can play those scenes in my head whenever I want, anyway. I skipped over a lot of the music, too. That’s the soundtrack of my life. It’s on a permanent loop, somewhere embedded deep within my brain. It doesn’t take much to pull it out again, and I didn’t need the movie to do it.

I just watched the scenes of people; walking, conversing with one another, eating, camping, being one big 400,000-member functional family. They were beautiful. They were all young, of course, which probably helped perceptions, but they also did beautiful things. They hugged one another. They shared their food with strangers. They proclaimed peace and love, and for three days, at least, they more or less lived it. You can say that it was an artificial environment, no doubt chemically enhanced. But they lived it for a bit. They just couldn’t sustain it.

I recognize that I often say the same things about Christianity – following Jesus – which became the primary focus of my life, the overarching vision, not too long after I fully embraced the Woodstock Generation. The theory is great, the practical application has somehow, inexplicably led to the Trump Hate World Shitshow. There is a cavernous abyss between Point A and Point B, and it is often hard to recognize even a dim flicker of the original vision.

For what it’s worth, I still like the original vision. I agree with that vision. Peace ‘n Love. What strange and strangely powerful concepts. We are all weak, double-minded, easily led astray, subject to a thousand derailments, hippies and Christians and hippies/Christians. It has largely turned into a dumpster fire for many of the involved parties. But the vision is not wrong. It’s right and true. It was true in 1969, and it’s true today. Strangely enough, I watched a film about hippies from 1969 and remembered Jesus. It was a little slice of heaven. I’d like it back. I’d like a do-over for all concerned.