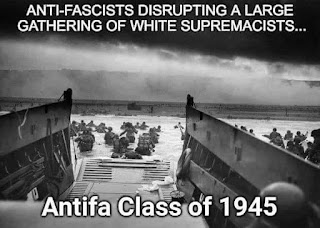 I am ambivalent about Antifa, which stands for anti-fascist, the non-organized, non-led, loosely affiliated bunch of people who oppose fascism. I don't like the violent actions that sometimes accompany their anti-fascism. I wish, fervently, that they had not beaten up a conservative reporter in California. I wish that they had not thrown milkshakes on the poor skinheads and neo-Nazis in Portland.

On the other hand, I am clearly and unambiguously against fascists, and thus I sympathize with Antifa. They've got it right, and they've got it right in their name. And I am with them. Antifa, which dates back to the rise of fascism in Italy and Germany in the 1920s and 1930s, had their hearts in the right places eighty or ninety years ago, and they have their hearts in the right places in 2019. I don't like everything I see, but, in general, count me in. I am anti-fascist. We fought a World War over this shit. Back in the day we called Antifa G.I.s. They stormed the beaches of Normandy.

As a point of comparison, Antifa is responsible for zero deaths in America in the past 20 years. According to the Anti-Defamation League, white nationalists and neo-Nazis were responsible for 18 of the 34 extremist-related murders in the U.S last year. Two weeks ago, a white nationalist killed 22 people and injured 26 more in his efforts to "stop a Mexican invasion" (his words, not mine).

In response, the President of the United States has vowed to label and prosecute Antifa as "a terrorist organization." Good luck with that. First, they are not an organization. They have no head, no acknowledged leaders. You can't go to antifa.com and get the lowdown. Second, it boggles my mind that Trump continues to coddle and ignore extreme right-wing groups that literally kill people while focusing his ire on groups that oppose them. Hmm, I wonder why that is.

By the way, I'd encourage you, too, to be anti-fascist. It's the human and humane thing to do. Even Jesus - the brown one from the Middle East - would approve. Go for it.