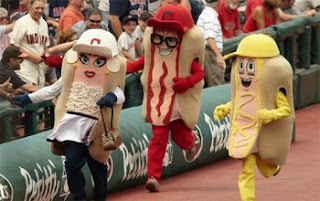 I believe I've sat in the bleacher seats for some 10 - 12 Columbus Clippers baseball games. As far as I can remember, the Clippers have never won. Tuesday evening they were behind 11 - 1 in the 7th inning when we all decided it was time to bail early. It was one of the most pathetic displays of baseball I've ever witnessed. The Toledo Mud Hens, the Clippers' opponent, were bombing home runs off the scoreboard.

And it's gone this way for every Clippers game I've ever attended. It's puzzling because, in general, they're not a bad team. Only when I show up.

We did stick around long enough to witness the Mustard/Ketchup/Onion race. Mustard won, although (s)he cheated, bopping the other racers over the head with what appeared to be a sledgehammer. So that was gratifying. Still, you probably don't want to take me to cheer on your favorite team.
Posted by Andy Whitman at 7:19 PM