Going for the Juggler, and Other Worrying American Trends 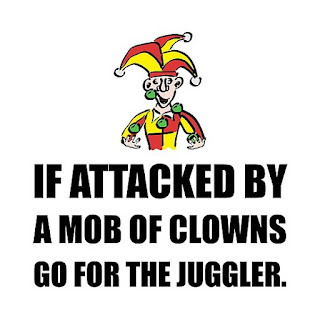 I’m paid to write words. I’m thankful for that, and I don’t take it for granted. I’m also aware that I can use words incorrectly at times, and that my (more or less) correct use of words doesn’t preclude wrong thinking stated reasonably well.

But for the love of God, I’m worried. As arrogant as it might sound, I’m worried that people who can’t express themselves very well, which in my mind still means that their thinking might be unformed, illogical, and/or muddled, are in positions of power, making decisions that affect you and me. Every. Damn. Day. Pardon the swearing and the incomplete sentences.

Our president, for example, who is the best at everything, tweeted today about the Prince of Whales. He was referring to a man named Charles, but my mind conjured visions of Shamu. It really bothers me that he doesn’t know the difference between Wales and Whales. And yes, anybody can make a mistake. But these things happen … are you ready? Every. Damn. Day. There I go again.

One Mat Staver, who is founder and chairman of an organization called The Liberty Council, an evangelical non-profit that opposes gay rights, stated last week that he was adamantly opposed to a U.S. Senate bill that explicitly made lynching a federal crime. He was opposed because the anti-lynching bill specifically called out sexual orientation in addition to race, religion, national origin, gender, and disability.

"This is a way to slip it in under a so-called anti-lynching bill," Staver noted, "and to then to sort of circle the wagon and then go for the juggler at some time in the future."

Words, words, words. Hamlet said that. You recall Hamlet? You can get that wonderful egg and pork dish down at Waffle House. And I will tell you that I’m a little concerned when people who want to exercise power, particularly over people who are not like them, start throwing terms around like “go for the juggler.” It’s just how my mind works, but it makes me think that they might not be the best people to make these kinds of decisions, or to even have any say about making such a decision. Words like “Liberty” (as in The Liberty Council) concern me in this context as well, because the last time I checked “liberty” doesn’t typically include the notion of taking away rights from other people, including the right not to be strung up with a noose and hung from a tree. It’s all very confusing.

It’s probably just prideful, wrong thinking on my part. Pardon me. You’ll have to do your own interpretationing on weather that’s rite.