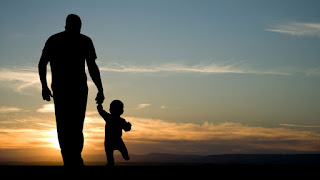 If you're like me, one of the reasons they get complicated is you. I don't think I've been a bad father. But there are times - days, weeks, months, years - when I've been a selfish father, too caught up in the Kingdom of Me to be of much worth to anyone. There are a thousand reasons and a thousand excuses. The burdens you bear simply by being born to the one you call "father" are not insignificant, either. We all carry the weight of inherited sorrow, incompetence, inadequacy, general fuckedupedness. And we are all carriers. We tend to pass it on.

Here is what is not complicated to me: I am so fortunate to be a father. To be married to the same woman for 37 years, the woman who helped me to become a father, is the best thing that ever happened to me. To see my daughters, now grown women, grow and blossom into the people they are intended to be is a source of incredible joy, two words that dour depressive types like me don't toss around lightly. In Christian terms, I am incredibly blessed.

Yesterday, roughly 500,000 people participated in the Pride parade in Columbus, Ohio. Not all of them were members of the LGBTQ community. I know people, some of them fathers, who have disowned their children because of their sexual orientation. It's not true of all or even most Christians I know who are living those realities. But it's true of some of them. My heart breaks for those children. My heart breaks for those fathers.

The best gift my wife and daughters and now my sons-in-law have ever given me is ongoing. They help me break out of the Kingdom of Me, to see the world through their eyes, to care with their hearts. I am so thankful for that. Everybody has a father. Not everyone is a father. But if you are a father, let me encourage you to be a father. Live who you are. Don't deny that part of your reality. You are complicated. Your children are complicated. They are also precious gifts. Please don't mess this up.