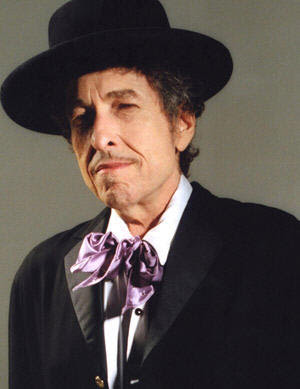 On September 11th, 2001, Bob Dylan released a new album called Love and Theft. It tended to get lost in the shuffle of other events that were transpiring at the time; something about airplanes crashing into tall buildings. But there was a song there called "Mississippi" that seemed to capture, in its enigmatic fashion, a whole world of beauty and malaise and regret, of time passing, of a shift in the order of things. Bob Dylan is always doing that, and he happened to do it on a day when the world changed.

On the day that my dad died, which happens to be today, Bob Dylan is releasing another new album called Tell Tale Signs. It's a 2-disc set of outtakes and previously unreleased tracks, and it's a masterpiece. Nobody but Bob Dylan leaves masterpieces in the can. Fortunately, he doesn't leave them there forever. This particular 2-disc set features two different versions of the song "Mississippi," each of them very different from the version that appeared on Love and Theft.

Every step of the way, we walk the line
Your days are numbered, so are mine
Time is piling up, we struggle and we stray
We're all boxed in, nowhere to escape

City's just a jungle, more games to play
Trapped in the heart of it, tryin' to get away
I was raised in the country, I been working in the town
I been in trouble ever since I set my suitcase down

Got nothing for you, I had nothing before
Don't even have anything for myself anymore
Sky full of fire, Pain pouring down
Nothing you can sell me, I'll see you around

Well, the devil's in the alley, mule's in the stall
Say anything you wanna, I have heard it all
I was thinking about the things that Rosie said
I was dreaming I was sleeping in Rosie's bed

Walking through the leaves, falling from the trees
Feeling like a stranger nobody sees
So many things that we never will undo
I know you're sorry, I'm sorry too

Some people will offer you their hand and some won't
Last night I knew you, tonight I don't
I need something strong to distract my mind
I'm gonna look at you 'til my eyes go blind

Well my ship's been split to splinters and it's sinking fast
I'm drowning in the poison, got no future, got no past
But my heart is not weary, it's light and it's free
I've got nothing but affection for all those who sailed with me

Everybody's moving, if they ain't already there
Everybody's got to move somewhere
Stick with me baby, stick with me anyhow
Things should start to get interesting right about now

My clothes are wet, tight on my skin
Not as tight as the corner that I painted myself in
I know that fortune is waiting to be kind
So give me your hand and say you'll be mine

Well, the emptiness is endless, cold as the clay
You can always come back, but you can't come back all the way
Only one thing I did wrong
Stayed in Mississippi a day too long
-- Bob Dylan, "Mississippi"
Posted by Andy Whitman at 10:20 AM

Hard to believe that song is from 2001. It's taken on so many meanings for me since then and always feels fresh, always seems to find new application.