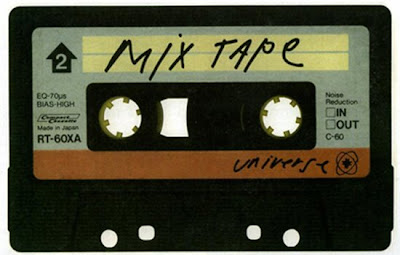 Mix tapes used to look like this. I've made a gazillion of 'em in my time, and spent untold hours meticulously placing needles on the grooves of record albums and pushing the Play and Record buttons at just the precise moment to avoid having to record the sound of the needle hitting the grooves.

Now I have that wondrous iPod, and creating mixes is a breeze. I do this every year, although I've now expanded the operations so that what started out as a single tape, and then became a single CD, is now a 3-CD set. And since I'm now receiving new music that will be released in January and February of 2009, it's probably a fairly safe time to compile the Best of 2008 edition. So here it is. If you'd like copies, send me an email message at whitmana (at) hotmail (dot) com with your snail mail address. I'll be happy to mail off the set to you, although it may take me a while to get around to doing so.

In no implied order other than alphabetical, this is my favorite music from 2008:

Firewater -- Borneo
Fleet Foxes – White Winter Hymnal
The Fleshtones – First Date (Are You Coming On To Me?)
Frightened Rabbit – Floating in the Forth
The Frontier Brothers – Technical Electronic Personic Robot (T.E.S.S.)
Gretel – Can I Still Come Over?
The Grip Weeds – Salad Days
Hacienda Brothers – A Lot of Days Are Gone
Hayes Carll – She Left Me For Jesus
Hayseed – God Shaped Hole
Headlights – Get Your Head Around It
Jacob Golden – Out Come the Wolves
Johnny Flynn and the Sussex Wit – Tickle Me Pink
Jolie Hollard – Palmyra
Josh Garrels – Jacaranda Tree
Kasey Anderson – Hometown Boys
Kasey Chambers and Shane Nicholson – Sweetest Waste of Time

have you heard the new "house of heroes" album Andy? I'd be curious to hear your thoughts on it.

Michael, I have not heard the new House of Heroes album, so I have no opinion. But I'd love to hear it.

Fred, that's a good point about Son Lux. Honestly, I've had the music ("At War With Walls and Mazes") for almost two years now, and it's easy to forget that it's a 2008 album. But it is. And I dearly love it, and it's likely to end up as my favorite album of the year. So I should certainly add a Son Lux song to my mix.

do you want to mail me a copy of your boxset? Some stuff here that I hadn't heard yet but will definitely look into. The Fleet Foxes disc gets constant Ipod play. Might be my favorite of the year.

you can stream the house of heroes album here:
http://relevantmagazine.com/thedrop.php

now i am hankering to hear that dylan song. someday, i hope i can make your list.

Nope, no Hold Steady songs. It's not that I don't love the album. I do. And "Constructive Summer," in particular, would easily rank as one of the best songs I've heard this year. But my advance copy of the album contains some serious anti-piracy warnings, and some of sort of copy protection that doesn't even allow me to burn the album to iTunes. I'm assured that the FBI will be after me if I try to do so. So ... no Hold Steady for you. No FBI investigation for me. It's a tradeoff I can live with.

I burned my Hold Steady to my iPod anyway, so I guess I'm a criminal.

No love for Lindsey Buckingham from anyone I've read online. I'll do it, then. The song "Love Runs Deeper" from "Gift Of Screws" is one of the most joyous pop songs of the year. The chorus erupts in a wall of sound that Phil Spector would envy, and Buckingham's guitar still sounds two people are playing it at once.