Bill Schroeder and the Great Red, White and Blue Calf 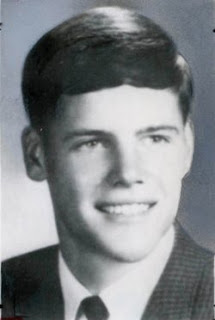 On this day when the country is unraveling, when the clay-footed idols strut and sputter, I can't help thinking about Bill Schroeder.

William "Bill" Schroeder was one of four students shot to death at Kent State University in May of 1970. He was a member of the ROTC, an exemplary student, and an Eagle scout. He had the audacity to be walking to class on May 4, 1970, and was more than 100 yards away from the protesters and soldiers. He was carrying a folder. That was his weapon of choice. And he was shot to death by members of the Ohio National Guard.

In the weeks and months following Bill Schroeder's death, his parents received over 2,000 threatening/harassing messages. They were called every vile name imaginable. They received death threats.

Think about that. Not one or two hateful nutcases. 2,000 messages.

I was shocked when I read that, and part of me still is. What it suggests to me is that the Great American Civil Religion, which is the real deity of the land, and whose chief symbol is the American flag, and whose faith is based on unquestioned and unquestioning allegiance, is a far more powerful and dangerous idol that I had ever envisioned. As time has passed, and as I've reflected on the many ways the worshipers prostrate themselves before the red, white and blue calf, my convictions have only grown stronger. Richard Nixon, who was guilty as hell, and who absolutely deserved to be impeached, could whip up the idolaters simply by wrapping his lies and denials in patriotic jargon. He was not a crook. He was a good, upstanding patriot. All those naive, idealistic kids and parents and grandparents who marched and carried signs and protested a senseless war in Vietnam were Communists.

And I see similar dynamics at work today. A President can be caught redhanded in blackmailing a foreign nation and then attempting to cover it up, in using $400 million of taxpayer's money in military aid as leverage to pressure a foreign country into damaging a political opponent. And his contributions for re-election can and will go up as a result. All that idealistic malarkey about upholding the Constitution? It's a mirage. Many Americans - perhaps enough to re-elect an admitted crook - don't really give a shit about that stuff. The evidence dates back at least to the spring of 1970, and it can be found as recently as this week. If you were on the campus of Kent State University on May 4, 1970, and you were shot, then you deserved to die. And so did your parents. Damn Communists. And nothing has really changed. It's still all about demonizing "Communists" and/or journalists, waving that flag like a talisman, and reminding idolaters about unquestioned and unquestioning obedience.