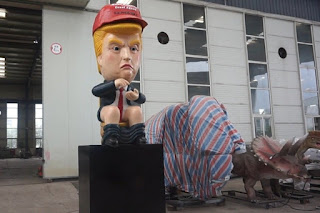 How is it that the rest of the world can clearly see what everyone but the 30% of Americans who comprise The Cult cannot see?

"Ahead of Donald Trump's controversial state visit to the UK next month, protesters are wasting no time in preparing the most imaginative means possible of ridiculing the US president.

"Dumping Trump" is an enormous robot rendering of the president astride a golden lavatory, smartphone in hand, trousers down and with his long red tie dangling into the bowl between his thighs.

The 4.9 metre (16 foot) high machine also has an audio function which reproduces some of Mr. Trump's most famous pronouncements, including "No collusion," "a witch-hunt," "you are fake news," and "I'm a very stable genius."