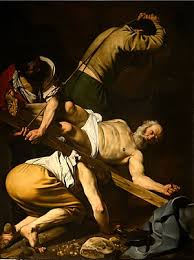 "A prince is nothing in the presence of a principle."
- Victor Hugo, "Les Miserables"

Certain Christian traditions are fond of quoting verses from Romans 13, which begins "Let everyone be subject to the governing authorities, for there is no authority except that which God has established." This is an argument that is frequently used to support whatever shite that happens to be dumped upon one's holy head by the powers that be, particularly when the powers that be represent a party or a political position you support. You don't like it? Tough. Be a good Christian and shut yer mouth.

So I was heartened again by today's first reading in church, which came from Chapter 5 of the Book of Acts. The governing authorities called Peter and the disciples to task for preaching about the risen Christ. "Shut up," they told them. "You're going to get in big trouble if you continue to do this." Peter shrugs his burly fisherman's shoulders and says, "Whatever. Who are you, big boss man? We're going to obey God rather than mere human beings."

One of the things I appreciate about the Catholic Church is that there are regular roll calls of the saints. They're listed by name. And if you listen, and you know their histories, it's readily apparent that a whole passel of them didn't shut their mouths and act like good passive Christian boys and girls. The Church tends to call these folks "martyrs," because that's part of the package, too. If you act that way you can lose your life. Peter and his buddies didn't get away with it either. They were flogged in Acts 5. Most of them, including Peter, ended up being killed by the governing authorities.

The contemporary Christian Church is adept at sniffing out persecution, some of it involving holiday greetings and "pagan" coffee cups. That farce shouldn't detract from the fact that there are places in the world where Christian lives are genuinely threatened. It is to detract from such a circumstance occurring in God's own U.S. of A., where some 72% of the population still claims to be Christian, and where the Christianists currently wield power in outsized ways.

Still, it was good to be reminded of some basic truths. Principles over princes. Every time. I hope I have the courage to live that way.