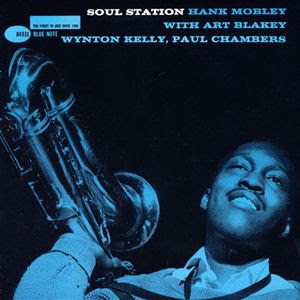 Every one's a masterpiece, I'm telling you. There's hundreds more where those came from.
Posted by Andy Whitman at 11:37 AM

Andy - I agree, these artists are great, it's just that they had to share the Earth with some giants like Miles Davis, John Coltrane, Thelonius Monk, et al. I've learned that if two or more of these guys show up for the same recording date you can assume it is worth your while listening-wise.

Enthusiastic agreement! There's a few on your list that I don't know, but based on my experience with "The Second Tier",I should check out.

I followed a jazz blog for awhile and listened to something every week or so just because the cover looked cool, or the players once shared a hotel with Miles in Paris, etc.

Never once was I let down.

Lee Morgan's Cornbread and Horace Silver's Song for My Father have long been favorites of mine from this era.
I agree with Grant, the album artwork alone (from Blue Note in particular) is enough to get one's attention. It seemed like such a creative time in jazz where everyone was composing great songs, playing on each others' albums, and churning out a huge volume of work.
I'll check out some of the names you've dropped that I have yet to listen to. Thanks, Andy.