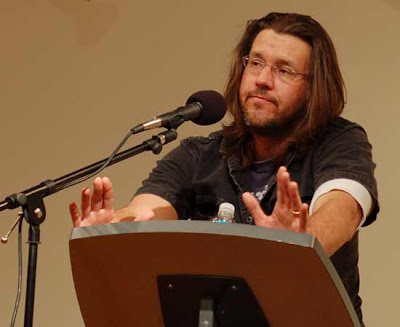 I love David Foster Wallace for many reasons, not the least of which is that he delivered the only commencement address ever worth reading. Here's a little snippet:

And the so-called real world will not discourage you from operating on your default settings, because the so-called real world of men and money and power hums merrily along in a pool of fear and anger and frustration and craving and worship of self. Our own present culture has harnessed these forces in ways that have yielded extraordinary wealth and comfort and personal freedom. The freedom all to be lords of our tiny skull-sized kingdoms, alone at the center of all creation. This kind of freedom has much to recommend it. But of course there are all different kinds of freedom, and the kind that is most precious you will not hear much talk about in the great outside world of wanting and achieving. The really important kind of freedom involves attention and awareness and discipline, and being able truly to care about other people and to sacrifice for them over and over in myriad petty, unsexy ways every day.

He may not have been in a church, but I still want to give him an "Amen."

This is just devastating news. The word "genius" is overused, but Wallace was a literary genius, the kind of writer who comes along about once every generation. His books were astounding, and he was the kind of stylist who could simply dazzle with his use of language. Many, many times I've stopped in the midst of his works and gone back to re-read a page or two, not because I didn't get it the first time, but because I wanted to go back and savor the beauty of not just a word, and not just a phrase, but the entire vision of a literary kamikaze whose sense of playfulness was matched only by his compassionate heart. Unlike many post-mods, who are all technique and no substance, Wallace wrestled with the deepest issues, and he unfailingly brought honesty and beauty to the process.

"For me, this is a cultural loss akin to Bob Dylan."

Yes. In fact, I've often thought to myself, "When Bob Dylan goes, *that* will be the kind of day where time stops for a while." But when I heard this news, it turns out, *this* was that kind of day. And I found myself thinking about the whole Bob-Dylan-dying-is-going-to-be-quite-a-day-for-me because I was surprised that someone else's death beat Bob to the punch, my-emotional-response-wise.

Hopefully I articulated that well and correctly.

Plus, I'm in the middle of my second read through 'Infinite Jest.' So I've been right with DFW for the past two months. And it's maybe the best book of the last 15 years. *And* 'Infinite Jest' is kind of like a ministration to addicts like me.

So, my minister committed suicide.

I'm just saying, I'm with you on this Andy.

I went to the library today and checked out Infinite Jest.

I can't say that I've read all of David's works, or that I haven't actually gone back to passages cause I didn't quite get them the first time, but we did share a bond. A bond in both of being regionally ranked junior tennis players as well as continuing to have a special love for the game. I'll miss him.

Scott, I had forgotten about Wallace's connection with the tennis world. Anne Lamott, another fine writer, is yet another formerly regionally ranked tennis player.

It makes me wonder if there's some sort of special connection between tennis and the literary world that you don't find in other sports, such as, oh, mud wrestling.

though you might find it in just plain wrestling, a la John Irving.

Thanks for that information about Anne, I never knew that about her.

Harper's has made his articles published there available online.