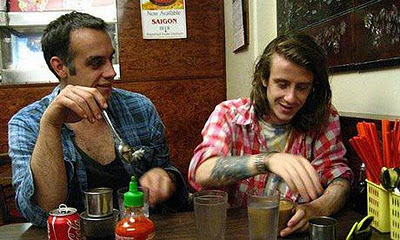 It's the sweetness that ultimately wins me over, and makes me smile. This is a guy who writes not one, but two songs about his mother. It sounds as if he likes her. And "Forgiveness" gets it exactly right. I have no idea what this guy believes or does not believe. But it's refreshing to encounter someone who holds out the notion that bitterness, cynicism, and recrimination are not the answers. What a lovely second album.
Posted by Andy Whitman at 9:21 AM

Another record I've been meaning to get to! "Album" was a favorite two summers back - I loved the mess of it and feared this would be too slick - but you've reassured me it's for the best.

What Grant said. Checking this out straight away, thanks for the heads up.
Wanted to say I used an image from a previous post of your on my blog, and credited you for it. Hope its alright.
Also, I'm just reading up here but sounds like you've got something amazing going. Good for you mate.