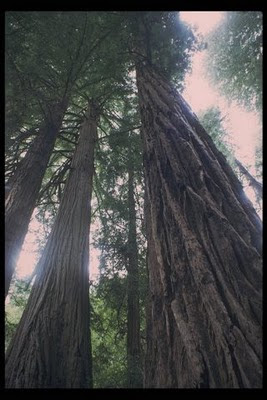 The five days Kate and I spent in the Bay area with my sister and her family can be conveniently labeled as "a blessing." What does that mean? It means that it was a rich time together, full of laughter and meaningful conversation, hugs, affirmations, a few tears, and some downtime that enabled us to see some natural beauty, to read a couple books, and, mercifully, to sleep. I was tired.

In the weeks before we left for California I was scrambling to accomplish a ridiculous amount of work in a pressure-filled environment, and I passed with flying colors. I wrote more than I've ever written; something like 53 documents, ranging in length from 1 to 30 pages each, during the seven weeks of my last contract assignment. I didn't know I could type so fast, let alone think so quickly about complex technological issues. But I did, and I left my project in great shape, accomplishing exactly what I needed to accomplish before the vacation break. And that was a blessing, too. I suspect I had some supernatural help.

So we went to California. We watched my sister, she of the cancer-ravaged spinal cord, walk through a redwood forest, the first time she'd been able to walk more than a few feet in more than a month. That was an incredible blessing. We went to San Francisco by ourselves for a day, and did the normal tourist things. We rode cable cars, ate bad seafood on Fisherman's Wharf, took the ferry across the bay to Sausalito, ate absurdly decadent chocolate sundaes on Ghiradelli Square, and visited Grace Cathedral, way up at the top of Nob Hill, an astounding church that is a pint-sized replica of Notre Dame in Paris. 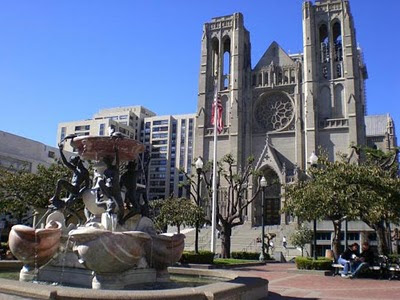 We wondered why we live in Ohio. This is a natural reaction to blue skies, 73 degrees, and one of the most picturesque parts of the planet. Then we looked at the cost of real estate and we remembered. We do live in Ohio, and it was nice to arrive home, but it was also surely nice to have a respite in what seemed like paradise, except for the damn cancer. That still seemed like hell. As my brother-in-law Mark put it, "Well, now we live with the reality of morphine in the medicine cabinet. It's amazing what you can get used to." I suppose you do what you have to do, and you adapt. But I'm not yet used to the thought, and I want, more than anything, for my sister to live. It was all a perilous blessing.

We arrived home on Monday to find out that my job had been eliminated. Who knows the real reasons? They're never entirely communicated. Something about the end of the fiscal year, and no budget for FY 2011. Sure thing. I'm certain that somebody knew the budgetary constraints on June 29th, my last day of work, but I guess it's easier to drop the bomb on the phone, from a distance.

I'm somewhat inured to this by now. The reasons change -- companies are bought and sold, the minions are laid off to appease the stockholders, the recession puts the squeeze on support jobs, departments are consolidated, consultants are always the buffer between the "real" employees and the harsh realities of an economic downturn, etc. But it always amounts to no job, and no sign of a job on the horizon, and starting all over again. Again. And again. It's enough to get a guy down.

For whatever reasons, I thought it might be different this time. I was with a small company -- just the Pres/CEO and me -- and I thought we might make for a pretty dynamic team; he of the glib tongue and the charismatic presentations, and me the grunt to do the actual work. And, in fact, that's how it worked out. He talked a good game, and I did all the heavy lifting, and I can lift a lot in the IT communications world. But even more to the point, I thought I was due for a blessing. There's that word again. The reasons for that are complex, but they basically have to do with the silly notion that God rewards good behavior. And it's not that I was perfect; far from it, in fact. But relatively speaking, I was on the upswing. Things were going well spiritually, maritally, every way. And I don't think I ever consciously identified it as such, but I suppose I figured that God would honor that by dismissing the one thing that was most likely to trip me up in the past -- a lack of job stability. Apparently not.

Ironically enough, my former boss -- yes, the Pres/CEO -- just called. It's the first time I've spoken with him since he told me not to show up for work after I returned from my vacation. And this time I got to ask him all the things I was too stunned to ask him when I talked with him last week.

Me: Were you displeased with my job performance?
Pres/CEO: No, you did a fine job.

Me: What happened to the one-year contract?
Pres/CEO: It got canceled. These things happen. It's nothing personal.

Three times per day I pray the Lord's Prayer, which includes the sticky little phrase, "Forgive us our sins, as we forgive those who sin against us." I stumble over those words every time I pray, but I know what they mean. They mean that I have no choice but to forgive. It's not an optional clause, and since I desperately need forgiveness, I need to forgive others who have wronged me. So lately -- over the past week or so -- I've been praying for help to do that, because right now I can't do it on my own. That kind of help would be a blessing. I'd be thankful if those of you so inclined could pray for that as well.
Posted by Andy Whitman at 1:40 PM

Wow. So much to comment on, but I will just say this: What an eloquent writer you are! Thank you for sharing, and you, indeed, have my prayers! I have experienced so much of what you have written!
~Alisa

I identify so much with everything you've written here--I've never been let go, but the starting over; always with the starting over. And the feeling of "now i've put in my time, so i deserve something good." The something good might arrive, but it doesn't look as good in my life as it did on the 80s sitcoms that I must have inadvertently (probably by marketing) taken as gospel truth about the way these things work out, or don't.

Strangely enough, we were also in SF a couple of weekends ago.

And, even more strangely, i took that very same picture of that very same church on Nob Hill. It's inconceivable, but within the realm of probability, that I was drinking coffee on a bench to your 10 o'clock (or so) when you took that shot.

I will indeed, Andy. Thanks for writing this.