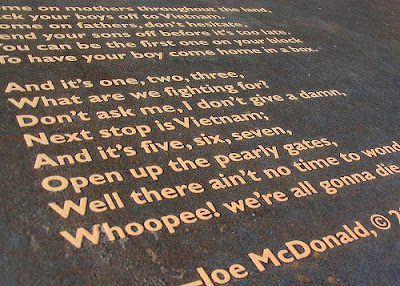 One of the fringe benefits of the Bush administration is that it has led to a resurgence in good, old-fashioned protest music, the kind last heard during the halcyon days of the Vietnam War. We went through the lethargic ‘80s and ‘90s, watched the fall of Communism and got fat and rich thanks to our high-tech stocks, and there just wasn’t much reason to kvetch and moan, outside of an occasional dustup in Kuwait or Kosovo. Strictly small potatoes. Now, thanks to Iraq and Afghanistan, Hurricane Katrina, and the implosion of the stock market and everybody’s retirement savings and/or jobs, the glory days have returned, and songwriters are once again aiming their barbed pens right at the heart of darkness. This is a good thing, although the rest of reality kind of sucks. But we take the good where we can find it.

On the flip side, it should be noted that most protest songs (yes, even from the glorious sixties) are boring, hamfisted, and have all the subtlety of a sledgehammer used to extract an irritated tooth. And so it’s also worth stating that the oughties, or whatever decade we’re in, have also represented the very nadir of protest song writing, as evidenced by Steve Earle’s misogynistically sneering “Condi Condi” (Oh Condi, Condi I’m talkin’ to you girl /What’s it gonna hurt, come on give me a whirl/Shake your body now let me see you go) and virtually the entire Neil Young catalogue from this decade, which has featured gently persuasive tracks such as “Let’s Impeach the President.” Ah, the wrath of the peaceful hippies.

But here are three musicians/bands who have done it well. Todd Snider and Chris Smither are smartasses, but they’re humorous smartasses, and their wit ultimately wins me over. The Decemberists are oblique and idiosyncratic enough to get by with what turns out to be a pretty powerful anti-war song, and it’s impossible not to sing along with that “la de da” chorus at the end. Who knew that the Apocalypse would turn out to be a musical?

I met a woman with a Midas touch,
I never could get her to touch very much.
I met a man of opportunity,
He never offered any of it to me.
I met a soldier at a recruit booth
Said he’d make a man out of me and stole my youth.

Working for a man who could not stop lying,
Drove us all off a cliff and called it flying.
That ain’t flying.

Most men flying seem to understand
That a man technically hasn’t flown ‘til he lands
If you’re coming into land and you crash and die,
All you really did for sure was get too high.

You ever get too high?
No. Neither have I.
But I will have to, to prove to you guys
I’m so turned around I could calm up a riot.
Fighting for peace? That’s like screaming for quiet.

We’re gettin’ edgy, we better find a war
There must be somethin’ worth fightin’ for
Peace is so peaceful, it ain’t no way to survive
When nobody hates you
Nobody knows you’re alive

We got the guns, we got the army too
They like to fire, they want to sing for you
Wham, bam, slip-slidin’ away
You know the less you got
The more you’re gonna pay

You want it, you get it, we got what you need
You ain’t got to sweat it, we gonna make you bleed

We got some freedom, we got the iPod store
We got the savior, you couldn’t ask for more
Take it or leave it, that’s the key for today
But if you leave it, you get it anyway

You want it, you get it, we got what you need
You ain’t got to sweat it, we gonna make you bleed

Sixteen military wives
Thirty-two softly focused brightly colored eyes
Staring at the natural tan
of thirty-two gently clenching wrinkled little hands
Seventeen company men
Out of which only twelve will make it back again
Sergeant sends a letter to five
Military wives, whose tears drip down through ten little eyes

Eighteen academy chairs
Out of which only seven really even care
Doling out the garland to five
Celebrity minds, they're humbly taken by surprise

There was plenty to protest about in the 80s/90s, we/they just decided to ignore them and as you said, things were good then.

Have you heard the Decemberists' singalong about Valerie Plame that led off their ongoing series of three singles this fall?

Joseph, I have not. I did just read a summary of the upcoming Decemberists album "The Hazards of Love." Here's what Colin Meloy had to say:

"It's a twisty, fantastical story about a woman named Margaret who is ravaged by a shape-shifting animal; her lover, William, who is desperate for the two of them to be reunited; a forest queen; and a villainous rake."

Jeez, not another concept album about a woman ravaged by a shape-shifting animal. This could be very good or very bad. I'm cautiously optimistic, but that description depresses me.